Aleksey Torokhtiy is no stranger to olympic weightlifting. The Ukrainian won Gold at the 2012 London Olympics. Lately the Olympic Champion has been challenging himself with a whole new approach to training… CrossFit!

Aleksey recently visited CrossFit Southie while in the U.S.A. to train with Tabata Songs. Check out his 4-minute Tabata workout while listening to “Kanye West (Tabata Mix)” by Tabata Songs, which you can download HERE.

The Champ, who’s snatch PR is 440 lbs, and clean & jerk PR is 530 lbs, has recently posted a series of videos documenting his transformation from Olympic weightlifter to CrossFitter. The videos share an exclusive view into Aleksey’s training as he learns new approaches to gymnastics, cardio, and even weightlifting. Watch this series of videos below: 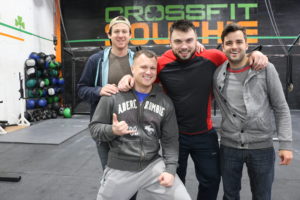